If you were looking to apply for colleges this year, you may be wondering what colleges are the worst in America. This is an important question to ask as there are going to be certain colleges that students should try to stay away from.

Like anything, there are going to be a few bad apples in the batch that you should try to avoid. There are many colleges that have a bad reputation for various reasons that most students will want to not apply for.

In this article, we are going to be discussing some of the top colleges in America that are considered to be the worst colleges to go to. These are options to carefully consider so that you can try to avoid applying to these colleges.

Keep reading to find out what colleges are considered to be the worst in America and why they have received this reputation. 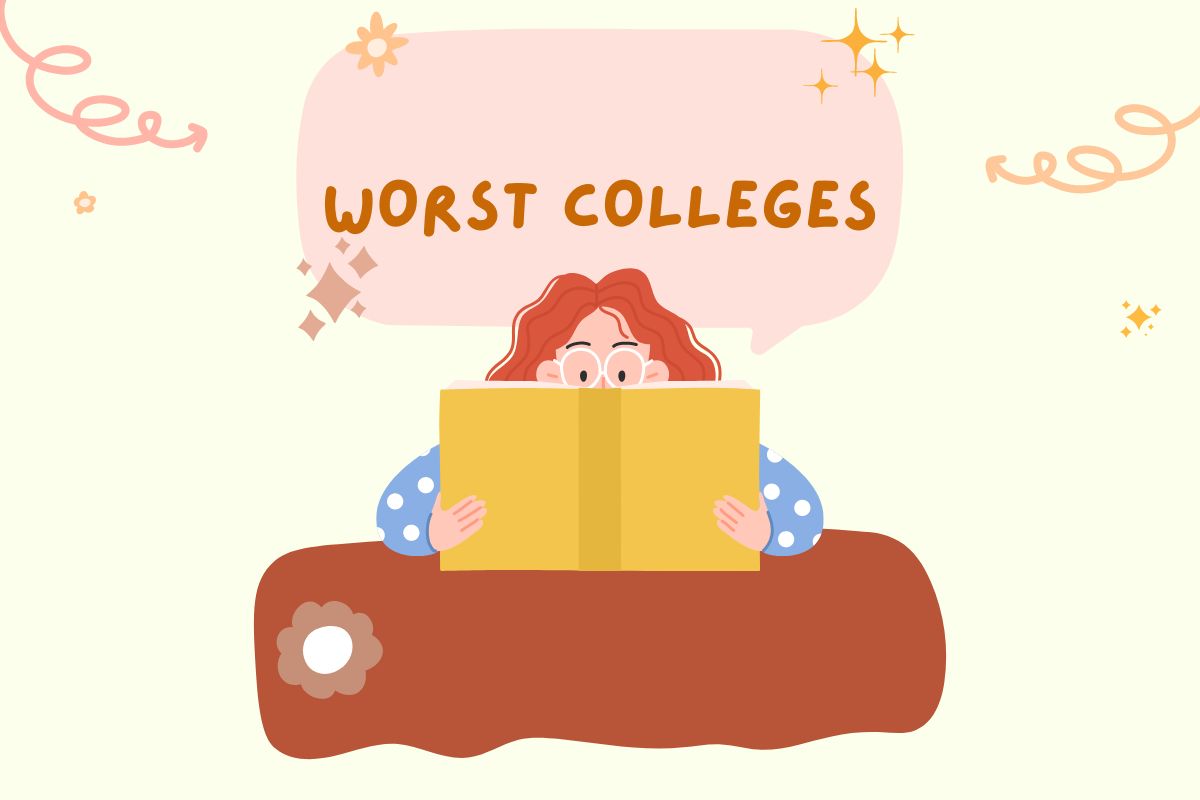 If you are looking to apply for colleges right now, you should know about the worst colleges in America that you should avoid. These are colleges that have acquired a bad reputation for various reasons for students.

In general, these are colleges that most students should stay away from if they want to have a good college experience. Though each college is going to have its own specific reasons for why it has made its way to this list.

The Florida Memorial University has acquired the reputation of being one of the worst universities to go to in America. One factor that has greatly added to this bad reputation is the fact that most students end up having $31,169 in debt on average from this college.

Attendance for this college is quite high, while the college graduation rate is only 38%. These numbers do not quite add up and leave a lot to be desired when you are considering going to this college. Grants and scholarships are available for this college, but they often do not even put a dent in the admission rates that you will have to pay. Because of this, Florida Memorial University is a very expensive college to get into, and most students do not end up graduating.

Saint Augustine‘s University is a North Carolina university that was created for formerly enslaved black Americans. It has since developed a very poor reputation as it is known for high amounts of debt and very low graduation rates.

On average, Saint Augustine‘s university students walk away with a debt of $22,500. This is paired with a graduation rate of 26%, which shows that students are not graduating for some reason.

Lindsey Wilson College is another private college that is located in Kentucky. This college offers degrees in associate, bachelor’s, master’s, and doctoral programs.

On average, students of Lindsey Wilson college walk away with $21,000 of debt after completing their college education. While the college only has a graduation rate of 33%, showing that something isn’t quite adding up with this college.

The cost to attend Lindsey Wilson College is $34,323, which is an unbelievable investment for students. Despite the many downsides to this college, there is one upside as 85% of students usually find a long-term job within two years of graduating.

Though you will need to consider the fact that only 33% of the students actually graduate, so there is no knowing what happens to the students who do not graduate.

Grambling State University is a college located in Louisiana and is known to be a state college. It started out as an all-black college but has now moved away from that label.

It is estimated to have a 41% graduation rate, though this varies by year depending on how many students actually end up graduating. Most students end up walking away with a whopping $25,732 in debt from attending this college.

In-state students are expected to pay an acceptance fee of $24,703, while out-of-state students pay $33,726. These rates show why many students walk away with such a high amount of debt from their college education.

This is not the absolute worst college to go to by far, but it is also not considered to be the best option, especially for out-of-state students.

Western International College is an Arizona-based college that has made its way to this list due to its extremely low graduation rate. This college only has a graduation rate of 15%, being one of the lowest graduation rates of any college.

The amount of student debt that most students walk away with is also twice as much as they usually have to pay for attendance. This is due to the fact that attendance is $11,186, while the average student debt is $21,228.

There is no knowing why exactly so many students walk away with such an insignificant amount of student debt. Especially when you consider the fact that attending Western International College is quite affordable in comparison to other colleges.

This high amount of student debt and the very low graduation rate should both be enough to keep students at bay, as this is not a good college to go to. Coppin State University is a university located in Maryland. The main reason why this university is on this list is that it only has a graduation rate of 20%, which is not even close to being ideal.

When a college has a low graduation rate, there is usually a good reason or a combination of different reasons why. This is something that potential students should look into before ever applying for this college as there may be issues that are causing students to not graduate.

Coppin State University also has a high attendance fee for out-of-state students, which is $30,202. Most students will also walk away with a student debt of $23,805, which is the average amount for these students.

It is also shown that the median earnings six years after college are only around $27,700 for students. This is a rate that is far below the national average and doesn’t leave much to be desired in this college.

One thing that this college does boast of is its 98% acceptance rate for new students who are applying. Though this can be attributed to the fact that this is not a very popular college, so it accepts just about anyone who dares to apply.

Philander Smith College is a college located in Arkansas that is not known for many positive attributions. The only good thing about this college is the fact that it has relatively cheap rates to attend.

However, this benefit is offset by the fact that so many students walk away with significant student debt. This amount of debt on average comes to $26,616, which is significant, especially for a cheap college.

It also doesn’t help that most students only end up earning a median of $24,400 later on. This makes it next to impossible for students to repay their student loans even once they have a full-time job.

The graduation rate for Philander Smith College is also only 39%, leaving some questions as to why more students aren’t graduating.

The Nazarene Bible college is located in Colorado and is considered to be an extremely expensive option for students. The attendance rate for students is very high, and most students do not even attend college full-time.

Most students can expect to walk away with $42,340 in debt, which is one of the highest amounts that you can expect to have. It also doesn’t help that students only tend to make $29,700 six years after they have graduated.

This means that most students that attend Nazarene Bible college are not going to get much back on their initial investment. This kind of attendance rate would only be considered worthwhile if students made much more later on in their careers.

This college also only has a 16.4 graduation rate, so many students do not even end up completing college. So it is impossible to know exactly how much they end up making later on in their career and if their student debt was worth it. Edward Waters College is located in Florida and has all of the issues that any bad college is going to have. This includes a low graduation rate, high student debt, and a poor median salary after graduation.

Only 19.6% of students graduate from this college, resulting in student debt that was not even worth it in the end. Graduation surveys also show that most students only make a median salary of $25,900 six years after graduation.

This extremely low median salary means that most college students will not be able to pay off their student debt very easily. And this only applies to the students that actually end up graduating, there is no one knowing what happens to those who don’t graduate.

On average, Edward Waters College students walk away with $22,558 in student debt.

Waldorf University is located in Iowa and is considered to be one of the more expensive colleges that students can go to in this state. It is known for high attendance rates as well as a high amount of student debt.

Students typically end up with $27,804 in debt, and 9.7% of students end up defaulting on their student loans. Many students go on to have a median salary of $37,800, but this only applies to those who end up graduating.

The graduation rate for Waldorf university is only 31.4%, which is relatively low. This means that not even half of the students at this university end up graduating, so there is no knowing how much debt they walk away with or how much they later end up making.

Sterling College is not the worst college in America, but it is considered to be one of the worst colleges in Kansas. This is because this college is very expensive and has a high rate of student debt that students have to later find out how to pay off.

It has a 42% graduation rate which is not the worst rate of any college that we have talked about. Though this is still less than half, which means that we do not know what happens to the other half of the students that do not end up graduating.

Most students leave Sterling College with $24,892 in debt but may make as much as $35,700 in six years. Though this only applies to the students who end up graduating from this college, they may still continue to struggle to pay off a large amount of student debt.

Baker College is located in Michigan and is known for not being a very good college as it only has a 21.1% graduation rate. This is not a good graduation rate as it shows that something is clearly keeping students from completing their college education.

Though many students do go on to make a median salary of $27,200 in six years after graduating. Though you have to take into account that it only applies to graduates, there is no knowing how much the students who do not graduate end up making.