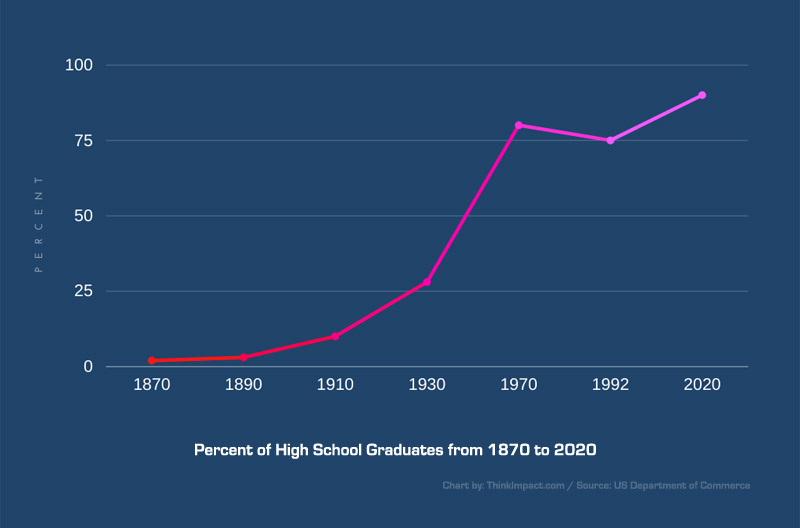 In the US, high school signals the beginning of secondary education. It holds a place of great importance in students’ educational careers. Thus, success in high school is often an indicator of a higher quality of life.

Due to the sheer size of the US population, there are a significant number of high schools and high school students. Therefore, it is important to look at several factors and indicators to gain a well-rounded understanding of the entire American educational system.

High school student enrollment is a significant indicator of educational success that can show how much of the current youth population is actively engaging in secondary education. In turn, this can shed light on whether the entire nation is achieving greater educational status.

High school rankings are becoming more common. High schools can be ranked according to various elements including high school teacher competence, whether Advanced Placement courses are offered, and teacher-to-student ratios among other factors.

High school density can be quite uneven throughout the country. The irregularity of high school density in the US can be due to state size, population density, or whether a particular location can be classified as an urban or rural area. Thus, the numbers can vary quite a bit.

In addition to viewing the high school student population , it is important to consider the various demographics contained within the general population. Specifically, gender and race statistics help to determine the equality of the American education system.

High school teachers play a significant role in the perceived competence of the school and student educational outcomes . Thus, it is important to consider the number of teachers currently employed in the US and their personal and professional qualifications.

High school graduation rates are a good indication of future quality of life for the American population Graduation from high school can often determine how much money individuals may earn and how much success they may achieve in their future careers. Graduation rates can also outline how well an education system has improved over time.

High school dropout rates can be equally as revealing as graduation rates. Experts need to pay attention to the students that are getting left behind. Dropout rates can have a major impact on employment rates, individual earnings, and crime rates.

The American education system is improving over time. There are more students graduating and fewer students dropping out than ever before in US history.

In addition, American students seem to be equally as literate as students in many other countries around the world.

This is especially true for Advanced Placement and STEM courses that can be indicative of tertiary education success. Additionally, the structure must also work to help individuals with disabilities and boost the graduation rates across the board. These improvements will lead to an educational system that embraces equality and educational success.