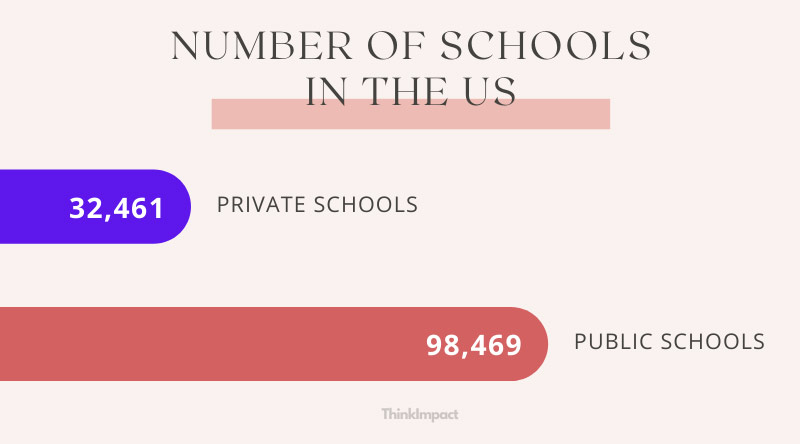 How Many Schools are in the US?

The Number of Students in the U.S.

Number of People who Applied to Join Universities

Towards the end of 2018, the percentage of English Language Learners’ students was higher in schools at the district level and more urbanized locales in comparison to people who are less urbanized.

The percentage of students who were English Language Learners covered 14.9% of the cities’ public school enrollments, 4.2% in the rural areas, 6.9% in the towns, and 9.8% in the suburban area. In addition, the percentage and number English language learner students’ distribution in public schools were as follows:

The data below, according to Digest of Education Statistics, shows the total number of students in each educational level.

The Number of Educational Institutions in the U.S. by Level and Control of Institution

College Schools In The United States With Their Total Student Population

According to The Digest of Statistics, they revealed some interesting facts about the student population in some of the Universities in the United States. Below is a table indicating the findings of the research.

Find out more about what post-secondary education is.

Number of US Charter Schools

Charter schools are tuition-free schools of choice funded by the public. Research revealed that charter schools have grown into a national movement that spans 44 states including the district of Columbia. According to federal figures, there are around 3,290,149 charter schools.

In exchange for exemptions from most of the state laws, charters are bound to a contract term. It lays out the school mission, academic goals, and other essential guidelines. According to Digest of Education Statistics, this data shows the enrollment in Charter Schools in some of the major states.

The research conducted by Digest of Education Statistics pointed out that:

The Percentage of Charter Schools in public schools

Benefits of Studying in Schools in the United States

The United States is one of the world’s most ideal learning centers, even for international students. Between 2019 and 2010, statistics revealed that over 1.1 million students moved to the United States to study.

In addition, according to the Digest of Education Statistics, it is evident that schools in the United States help learners to:

There is a higher percentage of students in public schools especially in lower grades compared to the students in upper grades who were English Language Learner students in fall 2018.

Among 12th-graders, only 5.1 percent of students were found to be English Language Learners.

Not forgetting that there are special schools for children with disabilities

In 2019, the number of students whose age ranges from 3 to 21 who got special education under the IDEA (Individuals with Disabilities Education Act) was 14% (7.3 million) of all the students who attend public school.

The IDEA (Individuals with Disabilities Education Act) that was enacted in 1975, mandates the provision of public-school education for students who have qualified between the ages of 3 and 21. Students who are eligible identified by professionals to have the following:

Percentage distribution of students aged between 3 and 21 served under the IDEA by disability type: This is specifically for the 2019–20 school year

According to U.S. News, this is the data from a survey carried out in over 1,800 colleges and universities for the survey of undergraduate programs. This data is meant to provide students and their parents the information they need to excel and have room for growth in terms of academics.

According to U.S News, the United States has ranked top with the best colleges and best graduate schools.

Private Schools in the United States

The statistics provided below show the characteristics of students enrolled in the nation’s schools in October 2018. This is according to the U.S. Census Bureau.

Facts You Should Know About Private Schools

Unlike public or government schools, private organizations run private schools. They have different curricular standards since they don’t receive funds from the government, and they don’t take part in running the school.

Reasons why you should study in the U.S:

College is a pathway that leads to building a successful career. When thinking about which college is suitable, many probably prefer studying in the U.S.

Before you choose a college, ask yourself these question: