Skip to content
Home > Mastodon Users
MENTIONS IN THE MEDIA

Mastodon has seen a huge spike in new active users since Elon Musk’s purchase of Twitter went through. 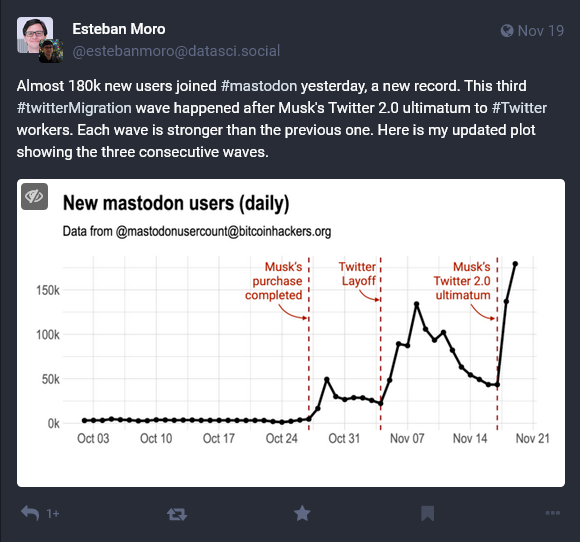 Consider some fascinating statistics, from new users to how much it costs some users to host a server for others to use.

Mastodon may be small, but we can find plenty of information on the demographics of its users, from gender to age.

Young adults tend to use Mastodon more than older adults, but there are users in all age groups.

Unlike other platforms, Mastodon has different servers that focus on various topics, but the general servers are probably the most popular.

Sadly, the general servers closed access to new users, but you can join servers based on your interests, and there are tons of them.

The final sale of Twitter to Elon Musk may have increased interest in Mastodon, but it’s been around for a while before that and had a good amount of use.

Consider how use has grown in recent days and weeks in specific countries and all over the world.

Here are some statistics and details regarding how to post and engage with other users when you join Mastodon.

While you can use Mastodon on your desktop, the mobile apps are convenient for accessing your account on the go, whether on Apple or Android.

App downloads have increased about as fast as new users on Mastodon, in general, so consider the statistics for both main app stores.

Of course, Mastodon’s biggest competitor is Twitter, so you should consider how the growth and total number of users compare to the bigger platform.

Here are a few statistics regarding the change of users on both Mastodon and Twitter after the sale of Twitter.

Some statistics don’t fit into other categories but are important to know about Mastodon, especially before you sign up.

Here are some numbers, from when it was founded to certain rules the platform has for server hosts.